Collaboration despite differences: In the EU, cross-border regions such as the Rhine-Meuse-North Euregio are witness to some of the most dynamic exchanges of people, knowledge, services, and goods, actively redefining the meaning of borders and of the nation itself. This regional and local cooperation is often a grassroots effort, a spontaneous action happening individual of capitals’ control. How can the EU improve its collaboration as a union of states through the model of regional border cooperation?

However, people living in border regions still face various administrative and legal obstacles in their day-to-day lives. Different social security and taxation systems hinder people from pursuing employment across the border, getting one’s credentials recognised may take months and be costly, and healthcare personnel are left waiting on the border when an emergency is raging in their neighbouring country. If we truly wish to recognise the importance of these unique areas, the cooperation between citizens in border regions must be made to run smoothly, intuitively, and spontaneously.

Cross-border cooperation is a part of daily life for almost 30% of all EU citizens and plays an imperative role in European integration. People living in border regions face various administrative and legal obstacles in their daily lives, including different social security systems. Solving these issues requires cross-border cooperation to be made run smoothly without hampering its spontaneity and authenticity.

European border regions, also known as Euroregions, are a defining feature of European geography, with internal borders regions covering 40% of the EU territory and hosting almost 30% of EU citizens. Border regions are not simply intersections of two or more Member States, but unique areas that facilitate a fluid exchange of social, cultural, political, and economic influences. They serve a unique function in European integration: on the one hand, the status of internal borders has diminished since the creation of the EU, but on the other hand, border areas and their citizens have become a source of intuitive and natural territorial cooperation.

Although border regions constitute potential areas for optimal European integration where studying, working, and moving across borders is a daily occurrence, they often lag behind in development and are typically located far away from the national capitals, with less developed public transportation than elsewhere in the country. Despite internal border regions’ significant contributions to the EU’s economy as they produce 30% of the Union’s GDP, their citizens are reported to cope worse economically than those living in non-border regions. They also often lack access to hospitals and educational institutes. The EU’s unique border areas can only utilise their full potential for innovation, social cohesion and integration if they are provided with the resources and administrative uniformity to do so. In order to achieve this, the EU must come closer to its citizens and ensure they can carry out their daily activities regardless of the existence of an administrative national border.

European Cross-Border Cooperation (ECBC) is encompassed within European Territorial Cooperation (ETC). In addition to ECBC, it covers transnational and interregional cooperation. ETC has been an instrument of the EU’s cohesion policy since 1990, which aims at promoting and facilitating the “overall harmonious development” of Member States and their regions. As a part of the cohesion policy, ETC is constructed to solve problems that despite transcending national borders require a common solution. In 2007, the European Grouping of Territorial Cooperation (EGTC) was created to bring uniformity and legal and administrative stability to cooperation with border regions. ETC programmes are planned and financed for seven-year programming periods as a part of the European cohesion policy and run parallel to the EU’s long-term budgetary periods. Within the EU budget, ETC is financially supported by the European Structural and Investment Funds. Three main Funds specifically target the areas of ETC: European Regional Development Fund (ERDF), the European Social Fund (ESF), and the Cohesion Fund (CF). Given the long policy cycle, ETC programmes must seek to foresee future challenges and changes within the Union.

Almost 75% of the allocated resources to ETC in 2014-2020 are used to finance ECBC programmes, also known as Interreg A. They aim at fostering cross-border cooperation between NUTS 3 regions in at least two Member States located either directly on the border or close to the border area. In 2014-2020, the EU funded around 60 ECBC programmes in various border regions, such as between South-East Finland and Russia, Italy and Slovenia, and in the Euregio Rhine-Meuse-North between the Netherlands and Germany. In the latter region, the EU has for example funded language courses, exchange programmes, and internship opportunities for vocational school students to explore cross-border job markets. In the border region between Finland and Russia, the EU and national governments provide funding for projects that seek to tackle interregional problems, such as environmental protection and business development.

With regard to the legal framework underpinning ECBC, the importance of cross-border cooperation is recognised in Article 174 of the Treaty on the Functioning of the European Union (TFEU), which acknowledges the special challenges of internal border regions. The ETC is revised, updated, and reformed under the ordinary legislative procedure.

Most cross-border cooperation takes place spontaneously between citizens of two or more Member States, making it heavily dependent upon individuals’ incentive and willingness to cooperate with one another. For individual citizens living in cross-border regions, studying, working, training, doing business, and consuming products or services in another country are daily activities, meaning that the disadvantages created by national administrative boundaries directly affect their livelihoods, educational opportunities, and even health. For instance, people living in Northern Portugal and working in Spain often have to spend significant amounts of money to translate documents and Danes suffering work-related accidents in Sweden might not be eligible for rehabilitation at home. Moreover, travelling restrictions prompted by COVID-19 can hamper cross-border citizens’ possibilities of commuting, visiting family, and shopping for necessities.

In addition to individual workers, consumers, and students, local communities and authorities play an imperative role in fostering cross-border cooperation. In 2017, the cities of Strasbourg in France and Kehl in Germany came together to build a tramline linking the two cities. This joint effort required local authorities to cooperatively solve the problems of different fare systems and differing technical standards. Additionally, the cities of Haaparanta in Sweden and Tornio in Finland have engaged in organised cooperation since 1987, including the establishment of a language school and the renovation of the Tornio Valley museum. This cooperation was prompted independently of EU-support, starting as a spontaneous effort between the authorities from two cities separated by a national border.

Although cross-border cooperation typically starts as a grassroots effort and is prompted by individual citizens and local communities, it seems like it is differences at national level that often hamper it. Though certain Member States have undertaken measures to facilitate interregional, such as the Upper Rhine Conference, cooperation, various problems hindering cross-border cooperation remain at the national level. In the aforementioned, 2020 EU cross border cooperation survey, citizens living in EU border regions named language differences (52%) and legal and administrative differences (44%) as the biggest obstacles to cross-border cooperation. Language barriers can prove too difficult to tackle when information about cross-border travel or employment and education opportunities in another Member State is only available in one language. On the other hand, Member States can take advantage of the linguistic pluralism of their cross-border regions by introducing multilingual initiatives that foster citizens’ language learning. For instance, some children living in the border regions between Austria and the Czech Republic as well as Hungary and Slovakia have the opportunity to attend bilingual daycare as a joint effort between Member States. 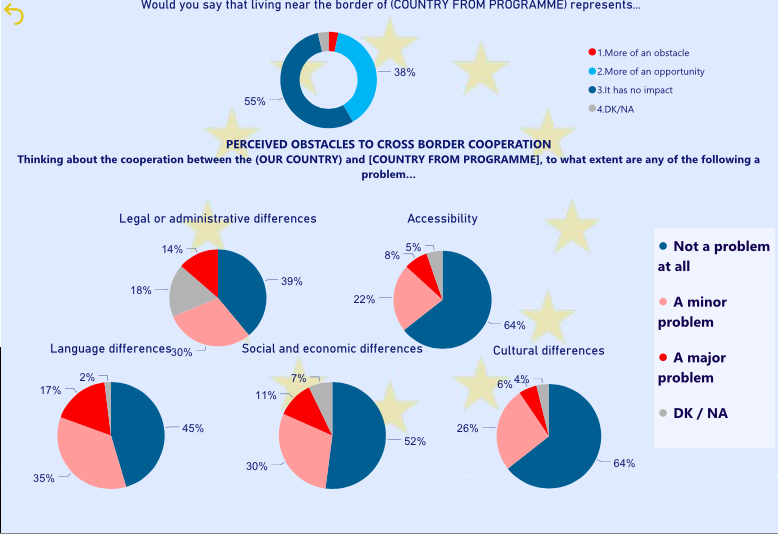 Biggest hurdles in cross-border cooperation admittedly stem from differences in Member States’ administration, including taxation rules, social security systems, healthcare, technical standards, legal systems, and recognition of credentials. Working in another Member State becomes difficult when one’s degree is not recognised, interregional public transportation systems are hampered by differences in technical standards, and discrepancies in taxation systems and unemployment benefits can make working in another Member State a bureaucratic nightmare. Administrative differences may even pose a threat to citizens’ health and wellbeing: should an emergency occur in the Hungarian-Slovak border area, ambulances would currently not be able to cross the border, and receiving treatment in another Member State can come with a hefty bill, as was the case for a Latvian woman who opted for rushing to a nearby hospital in Estonia instead of staying in her home country. Certain Member States, such as France and Spain, have since taken steps to ensure a more efficient share of interregional health care resources, particularly in light of the COVID-19 pandemic.

Despite the EU having coordinated and funded CBC programmes by nearly EUR 13 billion between 2007 and 2020, their experienced influence seems to leave a lot to be desired. In the 2020 survey, only 24% of respondents living in border regions had heard of an EU-funded cross-border cooperation activity in their area. This seems to suggest that the EU must come closer to its citizens and ETC resources ought to be allocated more efficiently in a way that focuses on solving problems that affect the ordinary citizens’ lives. Through regional border cooperation, the EU can enhance social and economic cohesion by creating more workplaces and educational opportunities in otherwise peripheral border areas, improve transnational infrastructure, promote more efficient share of resources, and, perhaps most importantly, foster European identity and integration by bringing individual citizens from various Member States closer together.

Internal border regions provide a significant contribution to the Union’s economic, historical, cultural, and social wealth. In cross-border areas, European integration becomes a tangible part of everyday life, be it through working in another country and getting back home for supper, receiving treatment across the border or learning another language at daycare. However, these unique elements of border areas are threatened by administrative and legal differences between Member States, additional bureaucracy in areas of social security, recognition of credentials, and technical standards, and a significant distance between ordinary citizens and the EU’s cross-border programmes.